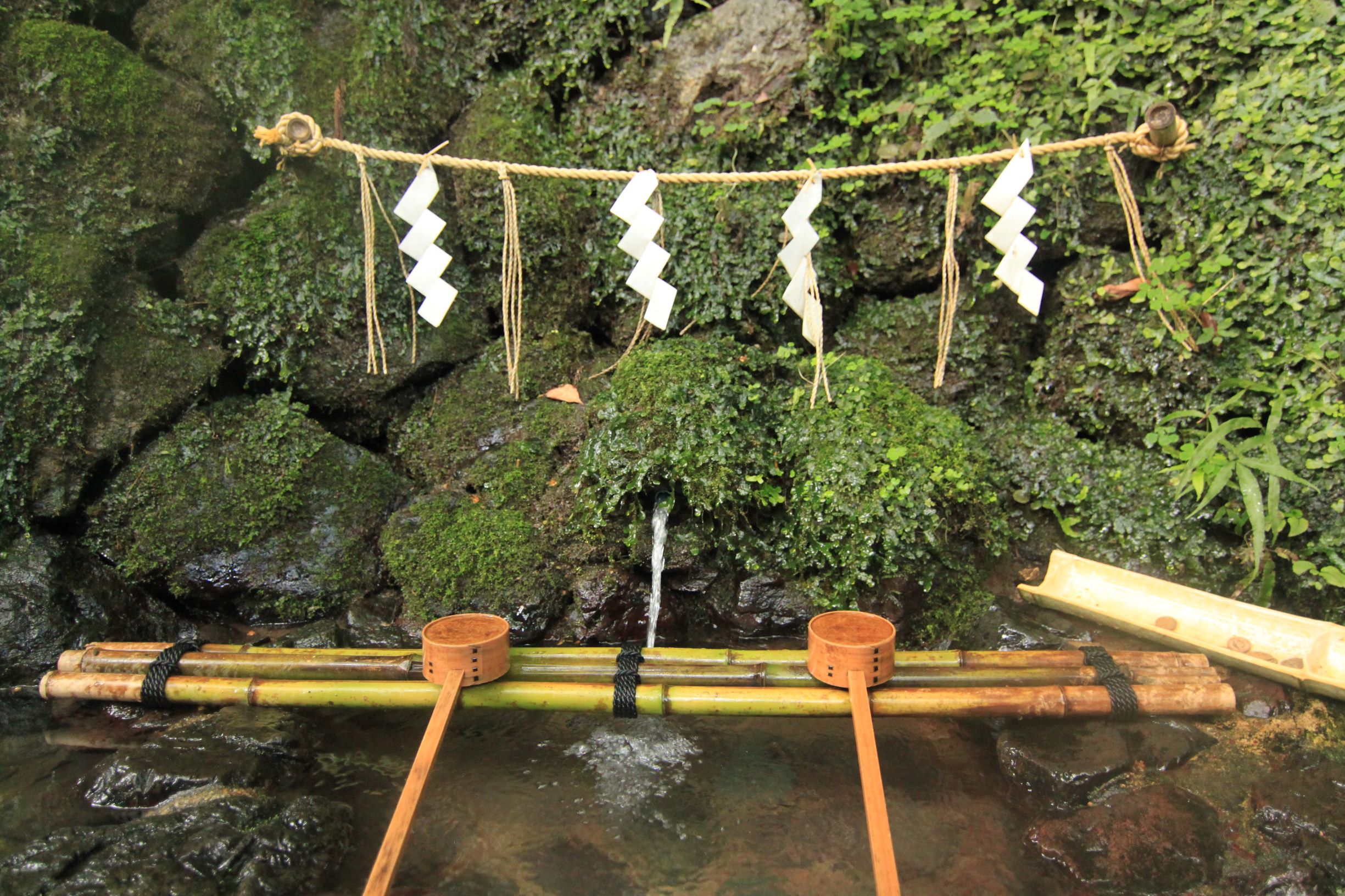 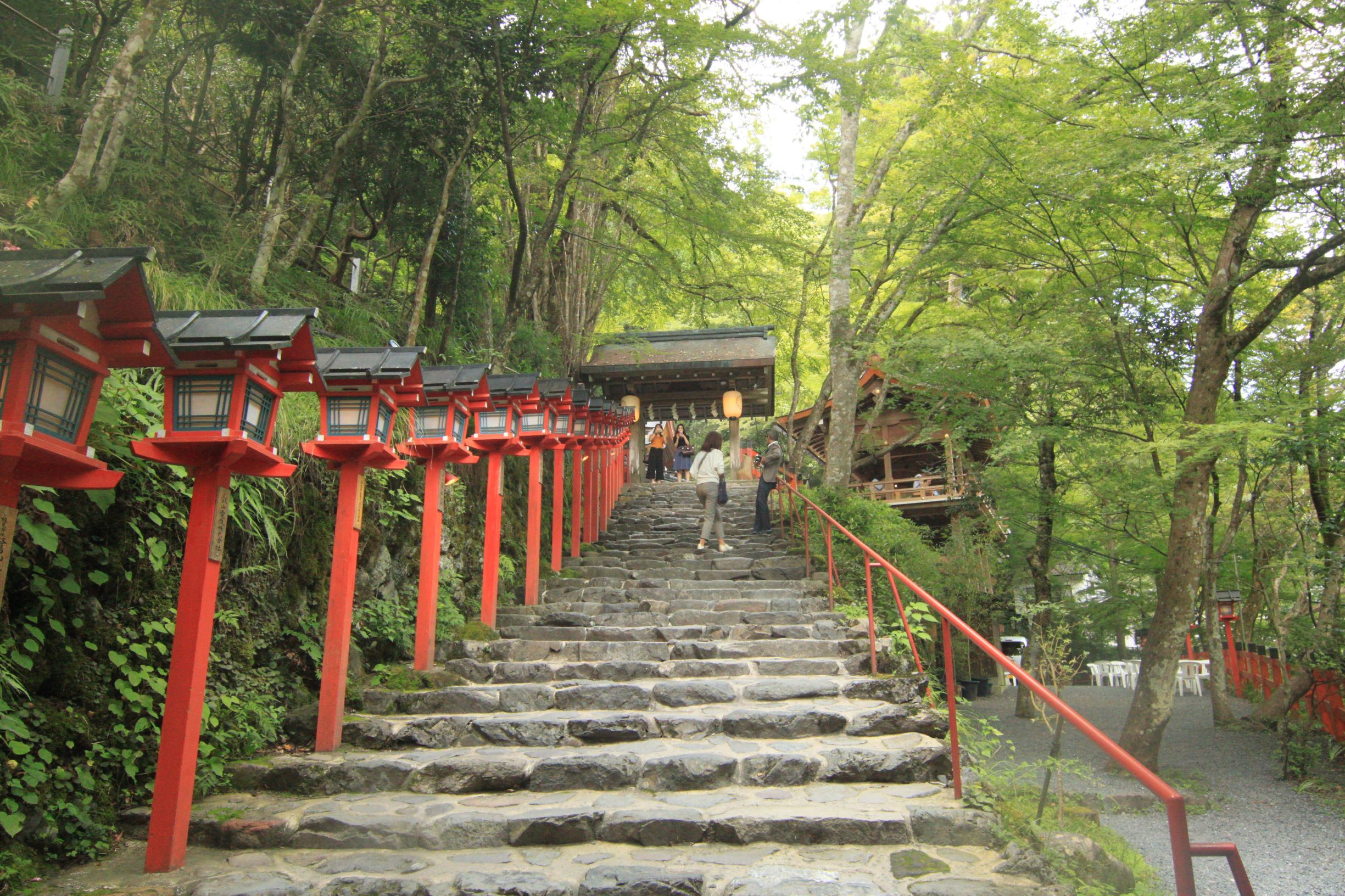 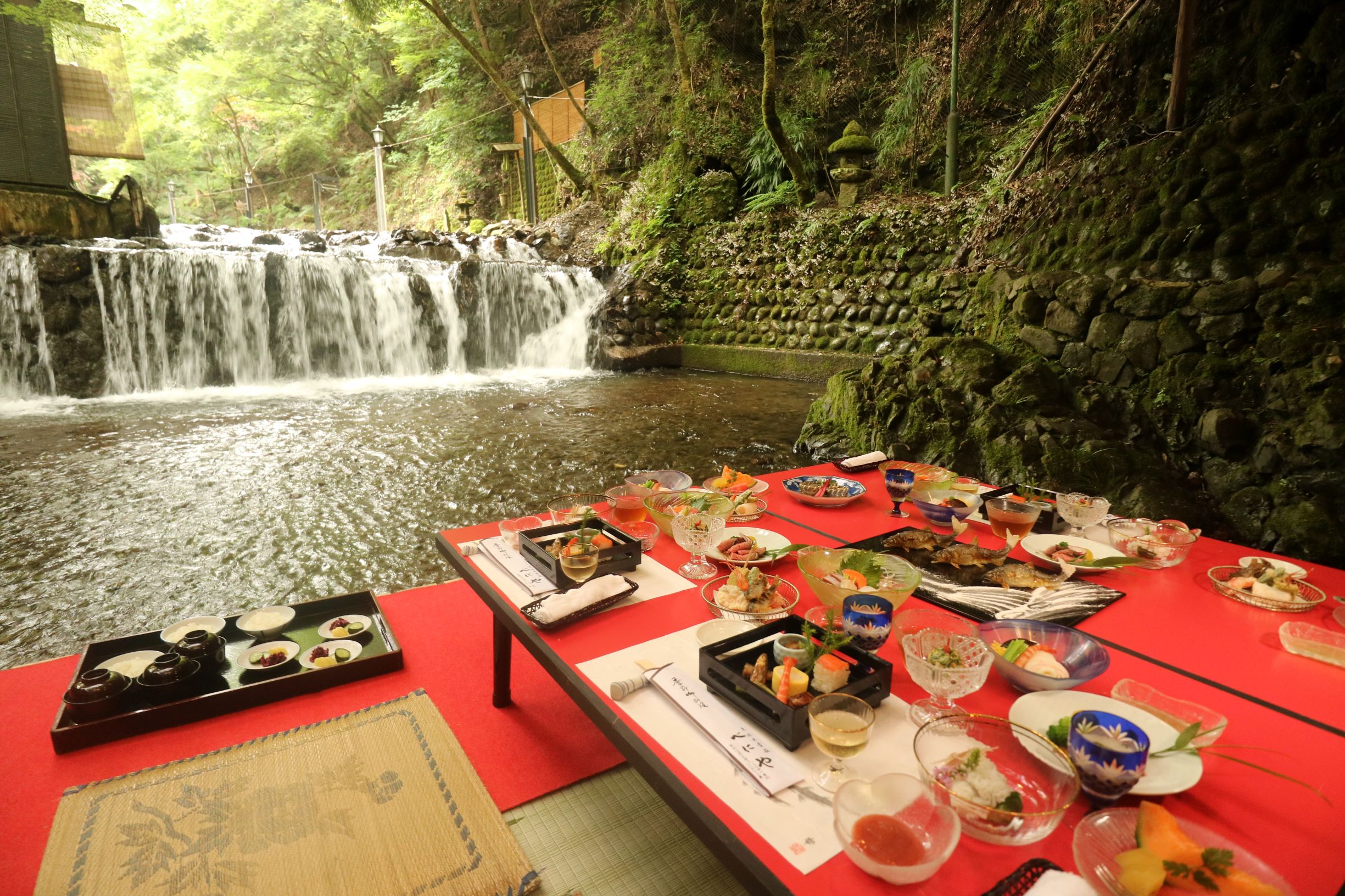 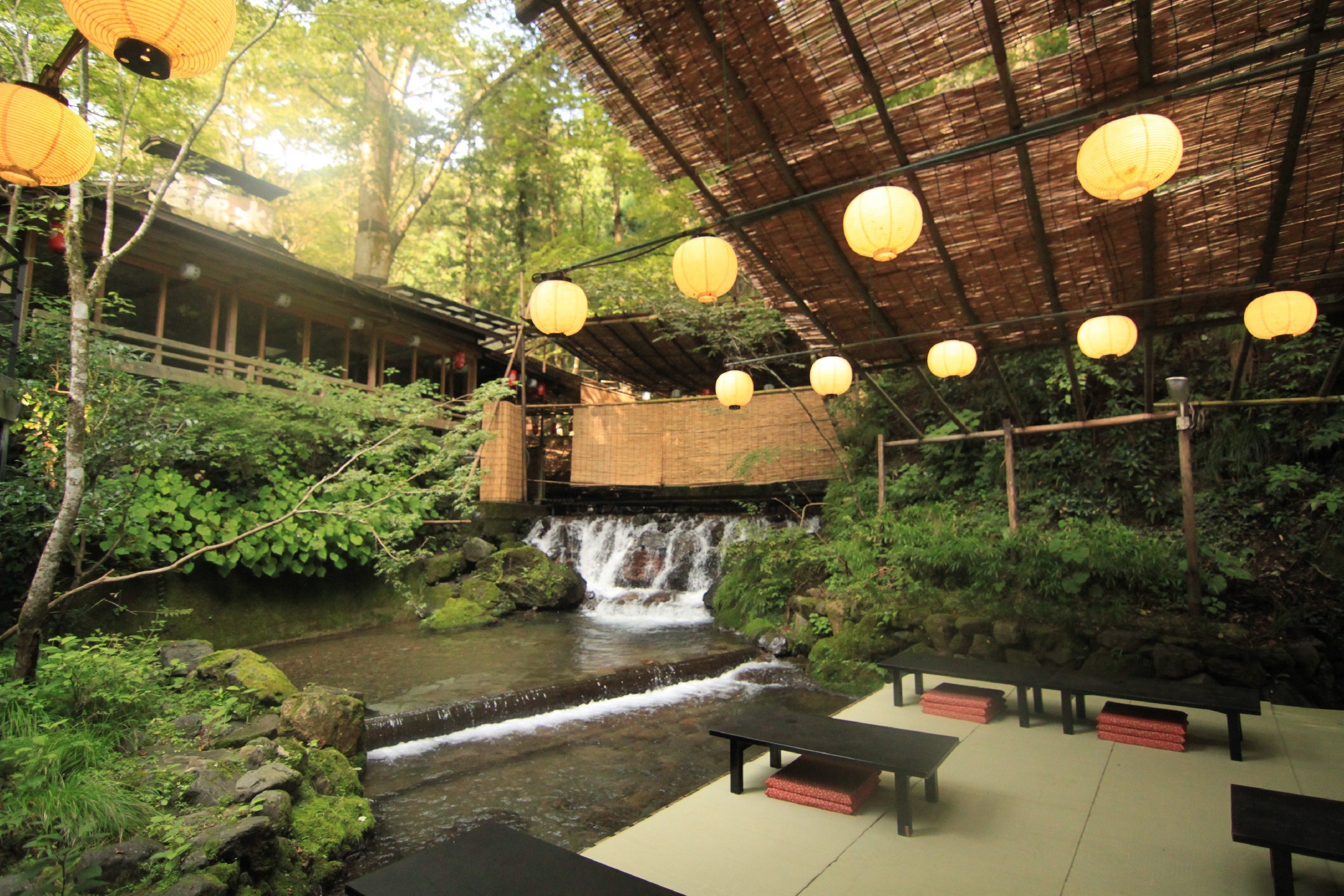 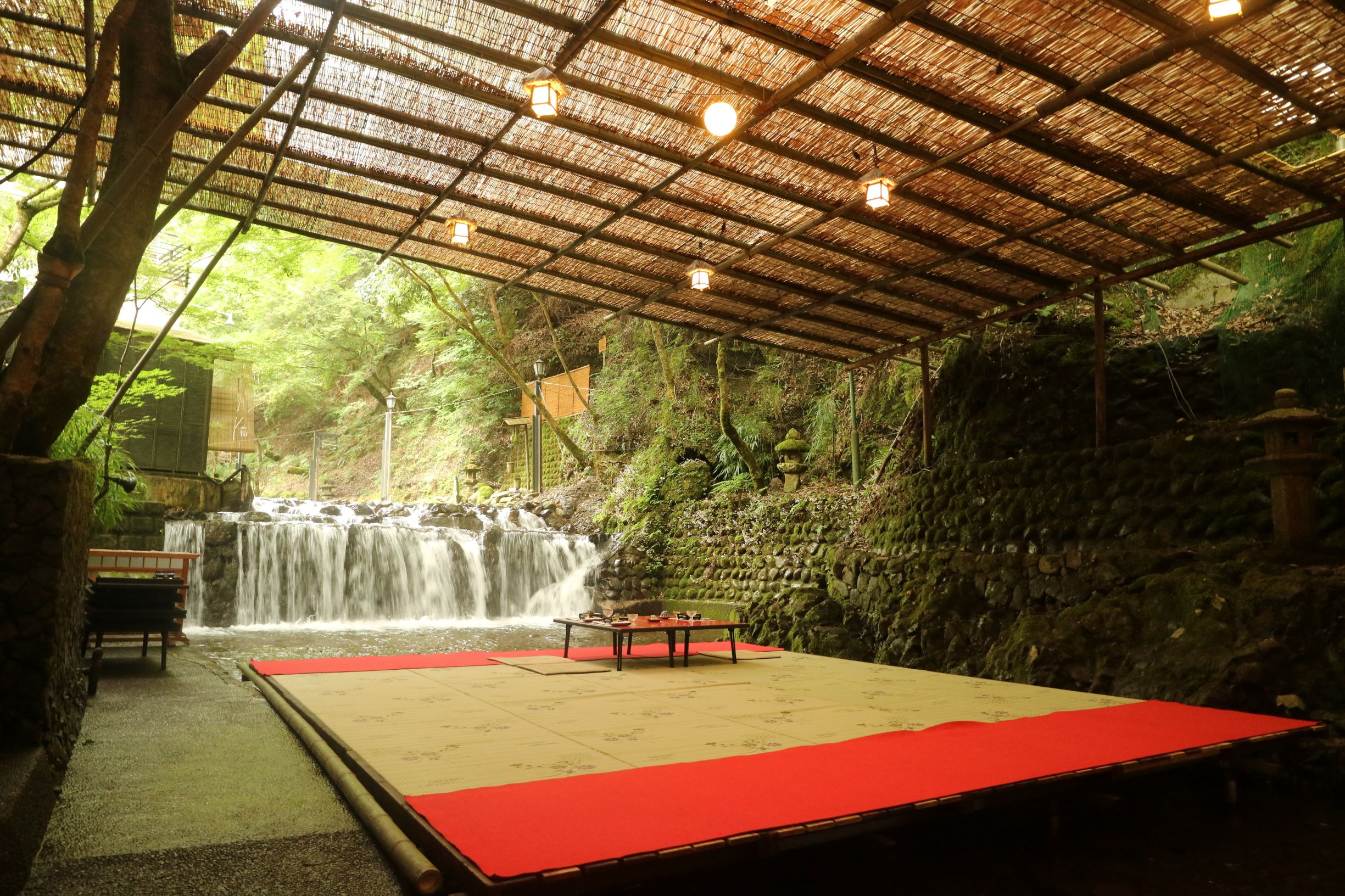 You have a wonderful chance to explore and enjoy the scenery of wider Kyoto area. The Junei Hotel takes you on a cool summer trip to Kibune. In an hour long tour you will learn about the history of this local town, and visit charming Kibune Shrine. The tour will also take you around a traditional Japanese restaurant, where, while viewing Kibune River waterfall you will hear about the history of “kawadoko”. “Kawadoko” is a Kyoto-style type of a restaurant whose floor is over or near a river. As such, it offers a cool, and relaxing place for dining during hot summer. Weather permitting, at Hirobun ryokan you will witness a unique and challenging way of obtaining flowing “somen” noodles.

It is believed that the kawadoko culture first appeared in Kyoto around 400 years ago, at the beginning of the Edo period. Tea shops along Kamo River would line up seats along the river to enjoy the refreshing cool air during summer.

Kibune is located along Kibune River, one of the sources for Kamo River, which runs through the heart of Kyoto. It is believed one of the gods of water resides here, with Kibune shine being built at the spiritual epicenter.

The “kawadoko" first appeared in Kibune around 100 years ago. Kibune has long been known as a place to escape the summer heat, and visitors would often dip their feet into the river to cool down. To accommodate these travelers, tea shops started setting up seating along the river. The cold water of the river cools the air around it, and some would even consider Kibune to be cold at the start of summer. While summers in Kyoto have an average midday temperature around 35°C, the average in Kibune is around 25°C. Because of this difference in temperature, Kibune is known as a natural cooler.

In Japan, every season has at least one dish associated with it, and for summer, the dish is “somen" noodles. In Kibune, Hirobun has the most famous “somen", which you can eat while veiwing a small waterfall for a relaxing feeling. The clear water, the sound of the waterfall, and the feel of nature here brings an experience different from anywhere else.

This is an online experience. Once you book the experience, the organizer will send you the Zoom link required for you to access the session.

Organised by The Junei Hotel